Archive for the 'Mobile' Category

If your content has something to say, say it out loud 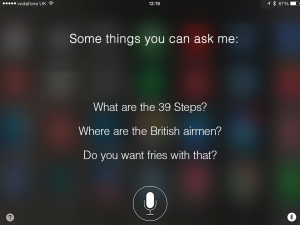 There’s been a lot of fuss recently about the iPhone 6s. I got the iPhone 6 Plus last year and it has changed the way I use mobiles.

Of course, the primary reason is that it’s bigger. Anyone who’s had one for a while and then looks back at the iPhone 4/5 that it replaced is usually shocked by how small the latter is. How the hell did i use that? And there are even bigger “phablets” out there too, some of which look faintly ridiculous clamped to the user’s ear.

The “smartphone” concept is just a little over 20  years old, and the term itself was first used in 1995, but the real development followed the introduction of Apple’s iPhone in 2007. That’s less than a decade but in that time the smartphone has revoultionised search and will go on to possibly change the very meaning of the word in the coming years.

In 2014,14% of consumers in the UK and Ireland used their smartphone during a purchase: that’s more than anywhere else in the world. And 60% of people viewed their mobile before setting foot in a real store.

The big issue — despite the advent of the “phablet” — is screen size. The traditional web does not fit, let alone a keyboard. So, as far as search goes, everyone is now being encouraged to say what they want instead of typing it.

That’s hard for a lot of people, myself included. It’s not just that I feel silly talking to a machine, it’s also that I don’t like sometimes very private stuff being overheard by all those around me. Nevertheless, for the first time the other day, albeit in the privacy of my car, I told Siri to record the time of a dental appointment … and “she” did!

Of course, one thing about saying and not typing is that there are no spolling mistooks! The power of Siri, or Google Now, or Windows Cortana, is to be able to recognise the difference between  “write”, “right”, “wright” and “rite”, or “hair”, “hare”, “air”, or “hayer”.

There’s still a way to go: a few minutes after my successful calendar episode I asked Siri to send a text to my wife and “she” flatly denied that the phone number in question even existed. Pseudo-female intelligent algorithm interfaces, huh?

The big challenge for speech recognition is Mandarin Chinese, which has the most number of “homophones”. Ironically, it’s also probably one of the languages which would most benefit from accurate speech recognition.

I used to work as Production Editor on The Western Morning News in Plymouth. The South West has one of the largest populations of Chinese people in the UK said to be the result of centuries of Chinese laundrymen on board Royal Navy ships, so one Chinese New Year, we thought it would be great to print “Gung Hay Fat Choi!” — Happy New Year — in Mandarin, in big characters on the front page.

We had a Chinese reporter on staff and the night of publication he was holiday — it being Chinese New Year and all — but we published anyway and next day we got a deluge of calls from irate Mandarin readers (I think it was two in total, and they were giggling) to say we’d published the script upside down!

While this should be an example of how you should never take anything for granted — “assumption is the Mother of all Foulups” — the whole point of this piece is to highlight that the age of the keyword (as we know) it is coming to an end.

In my last piece I wrote how Semantic Search means you don’t need to worry about Keyword Densities, you only need to write authoritatively about your subject in a natural way. In a written context, it’s quite easy to distinguish between homophones or synonyms, but in a spoken query the difficulty increases a thousandfold. To cope with this, the search engines are using more complex algorithms and even artificial intelligence to return search results.

Use this to your benefit. Don’t get hung-up on keywords or even keyword groups.

Instead aim to master a subject, be it canoes or water beds, bee hives or used car sales. If your website speaks about its USP in an authoritative way, the keywords will follow, and so will the search results.

And when you write content for your site, think about how you you would talk about it. Read your words out lout to see if they make sense. Remember, many of the people searching for your content will as likely be saying what they want — out loud — to Siri or her counterparts.

In future posts I promise not to bang on quite so much about semantic search. Well, not much.